Despite their small size, scale insects are not to be underestimated
Image: HHelene/Shutterstock

Found in gardens, greenhouses, and indoors on house plants, scale insects make the rounds, despite being fairly immobile themselves. With an appetite for sap and a fairly formidable armoured casing, scale insects can be the bane of plant lovers everywhere. Here’s how to deal with this tenacious pest.

What are scale insects?

There are over 25 different scale insect varieties in the UK
Image: Decha Thapanya/Shutterstock

Scale insects are sap-sucking insects that feed on a wide variety of plants.

There are over 25 species in the UK, ranging in size from 1mm to over 1cm in diameter, but in general they all follow a similar process through their life cycles. They’re fairly mobile during their growing phase, but by the time they reach maturity and grow their hard, shell-like armour, they are sedentary. They fix themselves to one spot in order to feed on the sap of their host plant.

Outdoors, they are particularly rampant between May to August. But they can be more of a problem indoors and in greenhouses where the warm environments allow them to thrive and reproduce year-round.

How do I tell if I have a scale insect infestation? 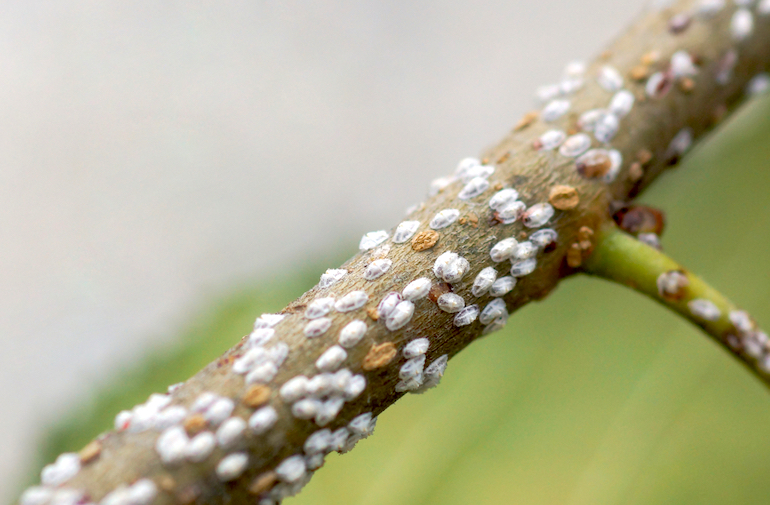 Scale insects are visible to the naked eye
Image: wk1003mike/Shutterstock

Scale insects and the damage they cause are easily visible on plants. After all, the more sap they drain from a plant, the worse off the plant will appear, with its leaves turning mottled and yellow, before finally dropping off. In the meantime, keep an eye out for the following symptoms:

If your plant is particularly overrun by scale insects, you may also notice poor growth.

What plants do scale insects threaten?

Scale insects are found on a wide range of plants, with those found in warm environments such as house and greenhouse plants being particularly at risk. Outdoors, they can be found on ornamental plants, fruit trees, and bushes, particularly in sheltered areas.

Cyclamen, bay and cherry trees (small white blobs under the leaves, or leaves turning brown) and more can be affected.

How do I control the spread of scale insects?

Check your plants over before planting out
Image: Stanislav71/Shutterstock

In large numbers scale insects can do a fair amount of damage. It’s worth noting that infestations on house plants will require even more vigilance as the environment is warm and there are no natural predators. Here’s how to control their numbers:

Check new plants – as scale insects are fairly immobile, infestations are often brought in on new plants. Check any new additions thoroughly for symptoms of scale insect damage before introducing them to your garden or home.

Remove scale insects by hand – this is particularly effective when the number of scale insects is low. They can be removed by simply picking them off, or gently rubbing the insects themselves with a cotton bud soaked in alcohol or a neem-based product.

Prune the infected stems and branches – if you catch the infestation early enough, simply pruning the affected areas and disposing of them may curtail the problem.

Introduce predatory but beneficial insects – a solution for outdoor infestations, ladybugs, lacewings, and parasitic wasps, for example, will prey on scale insects in their young larval stage.

Use an organic pesticide – such applications, preferably ones which are non-toxic to beneficial insects and honeybees, will be most effective while the scale insects are in their more mobile larval stage, also known as “crawler” stage. If using on an infected fruit tree, read the instructions to check whether it is suitable for edible plants.

Apply a horticultural oil – oils work on all stages of development by smothering the insects - particularly helpful with mature scale insects that are otherwise protected by their armoured casings.