How to grow Radishes

In the race for a quick crop, Radishes are the undisputed winners! Maturing in as little 30 days from sowing, they make superb 'gap fillers' for the vegetable plot.

How to grow Radishes

In the race for a quick crop, Radishes are the undisputed winners! Maturing in as little 30 days from sowing, they make superb 'gap fillers' for the vegetable plot.

These crunchy, little vegetables are undemanding and easy to grow - you don't even need a garden to grow them as they will happily thrive in containers and window boxes!

Radishes are perfect for inter-cropping between other crops that take months to mature. Sow them in between rows of tomatoes, potatoes, peas and peppers to maximise the potential of your plot. They can be harvested long before their companion crops are ready, without causing them any disturbance.

Read on to learn how to grow radishes. Browse our range and buy your radish seed online today! For more information about growing salad crops for your garden and containers, head to our comprehensive salad hub page.

For crunchy, colourful salads, choose Thompson & Morgan's Radish 'Rainbow Mixed'. The colour of each root remains a mystery until you harvest them! If you prefer your Radish in stir fries, then the Asian varieties 'Blue Moon' and 'Red Moon' are ideal for adding a splash of colour.

If you like to stick with traditional varieties then heritage variety Radish 'Poloneza' has stood the test of time. This attractive variety is useful for extending the season as is grows well under cloches or in the greenhouse, and resists bolting particularly well.

Whether you like them mild or peppery, there's a Radish variety out there for you! For a powerful bite, try Radish 'Vienna', or the old favourite Radish 'French Breakfast'. The long pink and white roots are particularly pretty but certainly pack a punch. If you prefer a mild, refreshing flavour then 'Cherry Belle' may suit your taste buds better.

Don't leave your veggie garden standing empty over winter. Mooli Radish 'Neptune' will bring an exotic twist to your mealtimes. These Asian relatives of our summer radishes are harvested in late autumn when most crops have finished. The peppery roots have a multitude of uses in the kitchen. Fried, shredded, baked or boiled - however you eat them, they are sure to be a taste sensation!

Fun fact: Did you know that Radishes are from the Brassicaceae family, related to Mustards and Cabbages!

How to sow Radish seed

Because they are such quick growers, a single sowing of Radish tends to mature at the same time. Even the most ardent Radish eater will struggle to eat an entire row at once - so it's best to stagger sowings and only sow a small pinch of seed at a time. As each pinch of seed begins to germinate; sow another pinch. In this way you will have a constant supply throughout the summer.


Direct sow radish seeds outdoors from April to August in soil which has been prepared to a fine tilth. You can lengthen the growing season by sowing under glass or cloches during March and September, provided that the temperature remains around 15-20C (59-68F). Bear in mind that Radishes prefer cool, moist soil. They tend to bolt and become unbearably peppery and woody in hot conditions, so you may need to choose a cooler, part-shaded spot as the summer temperatures begin to rise.

After sowing, cover them with just 1cm of soil. In just a matter of days, the seeds will germinate. If you have sown them thinly they shouldn't need much thinning out. Try to aim for one plant every 2.5cm (1") interval.

When growing radishes, you can prevent them running to seed by keeping the plants cool and well watered, particularly during hot, dry periods. Excessive watering should also be avoided as this will encourage radish leaf growth instead of root development.

Harvest your radishes 3 to 4 weeks after sowing when the roots reach a reasonable size. Simply pull the roots up as and when you need them. Don't leave them too long - they are best enjoyed young and crunchy!

Flea Beetle can be a problem by nibbling holes in the foliage. Growing seedlings under horticultural fleece can help to prevent Flea Beetle.

A group of house plants can be most effective for adding contrast, texture and atmosphere to a room. Plants which are unremarkable when grown on their own can bring significant interest as part of a grouped display. Aim for a complimentary range of leaf shapes, texture and colour. Grouped displays work best where the plants require similar growing conditions. 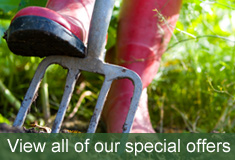