Christmas Gifts: Order before 9am, 21st December for guaranteed delivery in time for Christmas.

How to grow hardy geraniums from seed 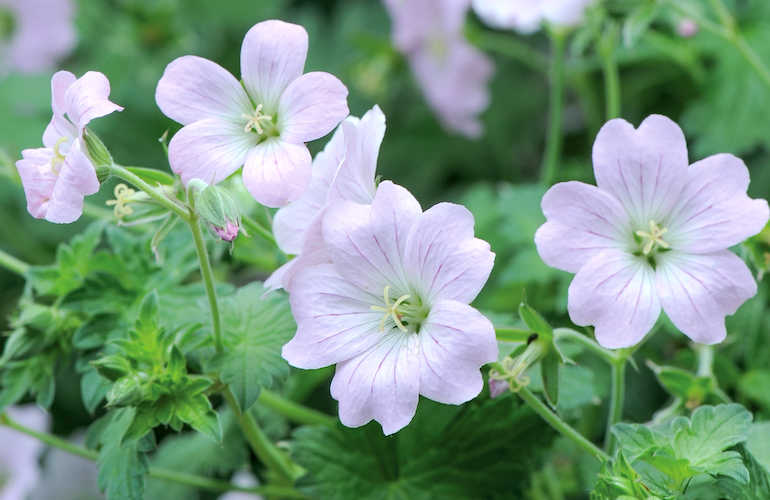 Hardy Geraniums are trouble-free plants that flower prolifically and are loved by pollinators. Rapidly increasing in popularity, hardy Geraniums produce double or single flower heads in white, blue, and pink. Here David and Frances Hibberd explain how to raise these beautiful blooms from seed.

What’s the difference between geraniums & pelargoniums? 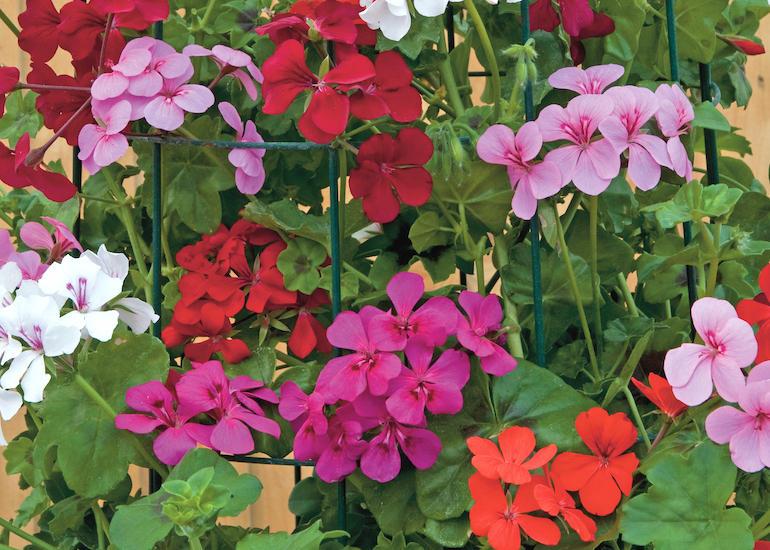 The first point is to distinguish between Geranium, species of which are commonly referred to as 'Hardy Geraniums' or 'Cranesbills', and Pelargonium, whose species are known in horticulture as 'Geraniums'. A confusion exists because the two genera were originally classified together as one, and by the time Pelargonium was separated in 1789, the name geranium had become indelibly linked in the public mind with this more showy, tender, South African group. It’s hoped that the current rise in popularity of Hardy Geraniums will help to rectify this misunderstanding.

How big is the genus geranium? 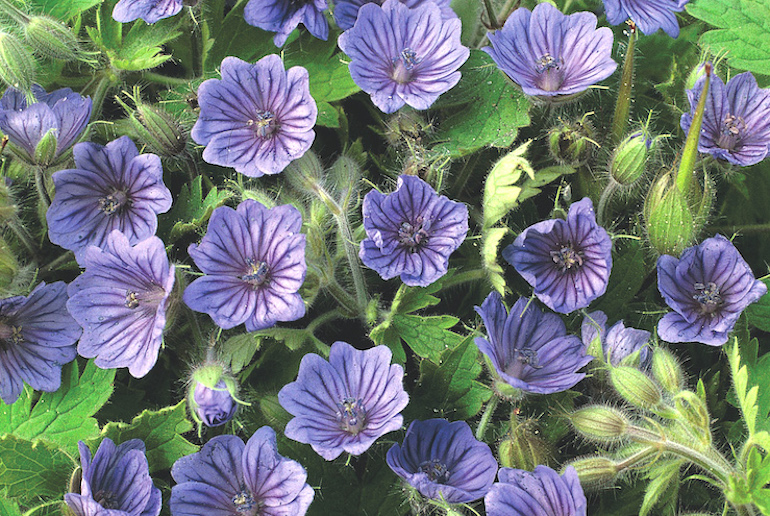 The genus Geranium contains over 300 species distributed mainly in North Temperate regions, and more than 100 varieties are presently in cultivation. Hardy Geraniums are in fact one of the most important groups of garden plants, being easy to grow and eminently suited, both aesthetically and ecologically, for all the different habitats of the garden environment. Species range in size from tiny 'alpines' like G. farreri, through rock garden varieties (mainly forms of G. cinereum and G. sanguineum) and medium sized herbaceous perennials (the majority of species) to the magnificent G. pratense and G. psilostemon, 4 feet (1.3m) tall or more. Most species are clump-forming, but several form spreading mats, while very few (e.g. G. procurrens) spread widely, rooting at the nodes. The symmetrical five-petalled flowers are purple, pink, blue or white and are easy to blend with virtually any colour scheme. They are borne freely, often over a long period, and are mostly ½-1½ inches (15-40mm) in diameter. Geranium leaves are attractively lobed and the plants are thus valuable even when not in flower.

How do you collect seed from a hardy geranium? 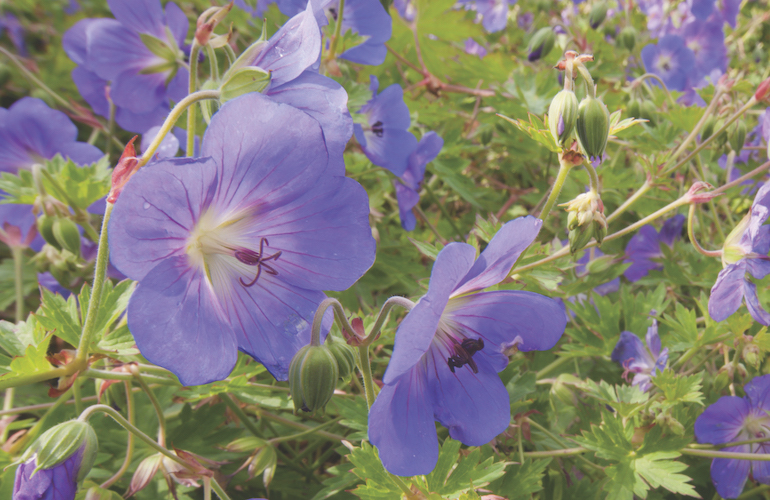 Hardy Geraniums are also called ‘cranesbills’ due to the beak-like shape of their seed pods
Image: Geranium 'Brookside' from Thompson & Morgan

After the flowers are fertilised, the petals fall and the base of the style rapidly lengthens and thickens to form a structure known as the rostrum, the 'cranesbill'. At the base of the rostrum are five fruit segments (mericarps) each containing one seed. As the rostrum dries out, five strips, each attached to one mericarp, spring away from a central column, explosively flinging away the seeds. Thus the seeds should be collected when they are ripe but before ejection. This critical stage can be recognised by the darkening of the rostrum and by the slight lifting away of the mericarps from the central column. In most species one visit to a fruiting plant will yield sufficient seed for a sowing, but in a few cases, e.g. G. traversii var. elegans, fruits ripen and dehisce one at a time and it is necessary to visit the plant several times. The fruit fragments should be stored in a paper bag until it is convenient to clean the seeds. In any case, the seed should be allowed to ripen fully before sowing.

How to sow and grow hardy geranium seeds 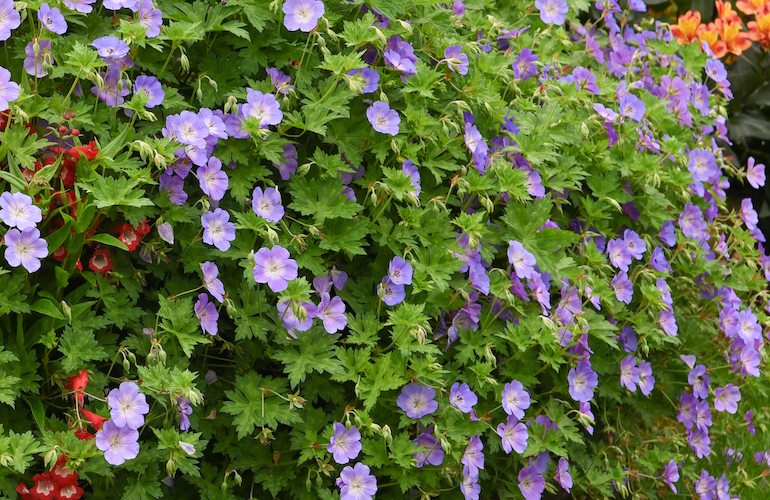 Geraniums are easy to grow from seed and no special methods are involved. Most seed composts are suitable; we prefer a mixture of equal parts of grit, sieved sterile loam and sieved peat, with the addition of 2oz (57gms) calcium superphosphate and ¾oz (21gms) lime per 1 bushel (36L) of compost. Ripe seed should be sown on a firmed surface and covered with a thin layer of compost and ¼inch (6mm) coarse grit. The compost should not be allowed to dry out completely; we find this is best achieved by using clay pots, plunged to their rims in grit in a shady place. Seed may be sown in autumn or spring, with the main flush of germination expected in late spring. Seedlings should be pricked out into either a loam- or peat-based compost when the first true leaves have developed, or grown on for a few weeks in the seed pan with liquid feeding at 2-weekly intervals.

When the young plants have made a good root system they may be planted out in the garden. Most species flower a year after germination, but some, including G. pratense, take two years. With all species, the full potential of the plants is not realised for another one or two seasons.

Which varieties of hardy geranium are best to grow from seed? 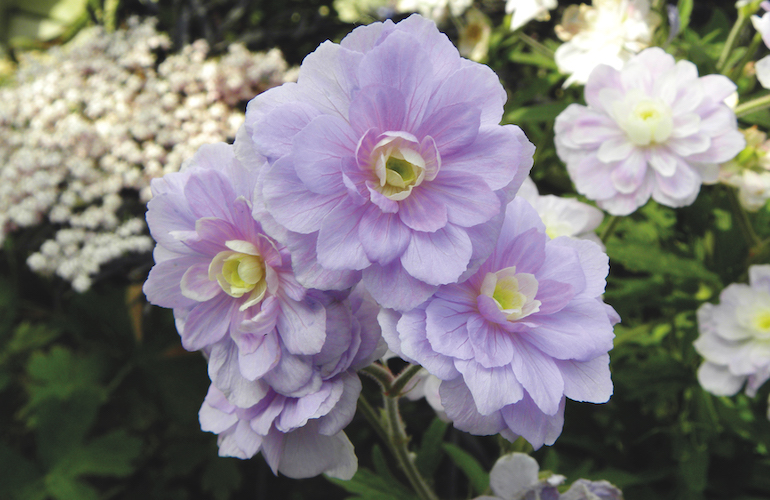 Most Cranesbills, apart from sterile hybrids and double-flowered forms, produce good quantities of seed. Some, however, are so easy to divide (eg G. himalay-ense, G. renardii, G. phaeum. G. macrorrhizum, G. dalmaticum) or raise from cuttings (e.g. G. procurrens) that seed is best used for forms that are vegetatively less prolific. Some attractive species and cultivars that can be raised from seed are now described.

G. aristatum and G. sinense are two desirable species with Cyclamen-like flowers in which the petals are swept back from a prominently pointed style; the former has pale pink, strongly veined petals and prefers a sunny position whereas the latter has dark purple and orange flowers and thrives in dappled shade. G. erianthum, a species in which the flowers are held boldly above the leaves, has pale lilac petals which seem luminous in semi-shade; the flowers are produced in several flushes throughout the season. The most dramatic species for a sunny herbaceous border is G. psilostemon, which has black-centred magenta flowers on tall stems. An interesting example of a summer-dormant species is G. libani: its leaves emerge inautumn to form a glossy mound, to be surmounted in April by 2ft. (60cm) inflorescences of light blue flowers. Finally, G. versicolor is a charming woodlander with net-veined white flowers, evergreen leaves and a long flowering period.

Some cultivars of Geranium come true from seed. Examples include the two forms of G. clarkei, 'Kashmir White' and 'Kashmir Purple', these having finely divided leaves and large bowl-shaped flowers, and G. sylvaticum 'Album', a tall, pale-leaved form with pure white flowers in spring. Other cultivars may be propagated from seed but only a proportion of their seedlings will be true. A good example is G. pratense striatum ‘Splish Splash’, in which the flowers are prettily streaked with blue on a white background: its seed yields plants of three kinds, white-flowered, blue-flowered and typical 'Striatum'. Another distinctive form of G. pratense is 'Mrs Kendall Clarke', which has pearly-blue petals netted with paler veins; seedlings vary and only the most distinctively marked forms should be selected. A favourite garden flower, G. wallichianum 'Buxton's Variety' provides another example of a cultivar normally propagated by seed but which needs selection to maintain the best form.

Several of the most popular garden Cranesbills are hybrids that have arisen naturally. These include 'Johnson's Blue' (G. pratense x G. himalayense), G. x magnificum (G. ibericum x G. platypet-alum), G. 'Russell Prichard' (G. endressiix G. traversii) and several well-known cultivars of G. oxonianum (G. endressii x G. versicolor). Other less well-known but nevertheless useful and attractive hybrids include several forms of G. x cantabrigiense (G. macrorrhizum x G. dalmaticum) and G. x monacense (G. phaeum x G. reflexum). There is clearly scope for further hybridisation within Geranium and indeed, when a range of Geranium species are grown together it can be expected that a proportion of their seedlings may be of hybrid origin. Two outstanding examples have occurred very recently as offspring of G. procurrens: 'Ann Folkard', a hybrid with G. psilostemon, and 'Salome', G. procurrens x G. lambertii.

Where can I buy hardy geranium seed? 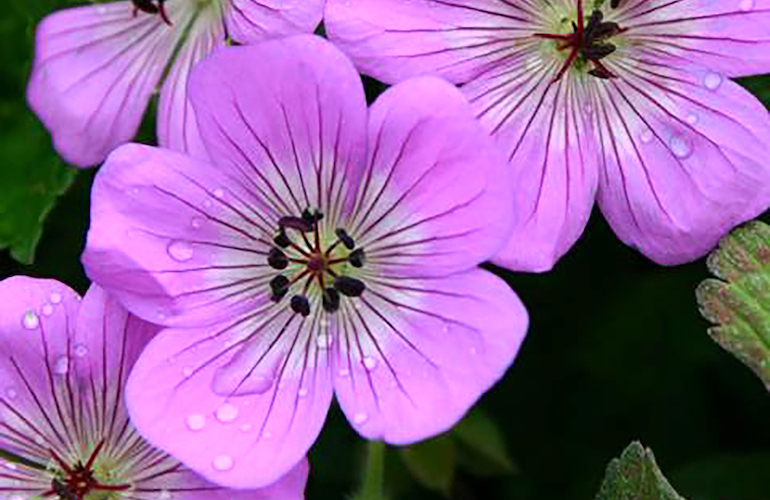 Hardy Geraniums include a diverse mix of colours and forms that light up the garden
Image: Geranium 'Bloomtime' from Thompson & Morgan

A few species are available from the well-known seed houses including Thompson & Morgan, but for a wider choice the best sources are the seed distribution lists of specialist societies such as the Alpine Garden Society and the Hardy Plant Society. Best of all is exchange with other enthusiasts, many of whom in Britain belong to the Geranium Group of the Hardy Plant Society.

David and Frances Hibberd specialise in the production of Hardy Geraniums at Axletree Nursery in East Sussex.

We hope you’ve enjoyed this extract and now feel confident to grow your own hardy Geraniums from seed. For even more information about growing and caring for Geraniums, check out our Geranium hub page which guides you to some handy online resources. Get in touch via our social channels, and remember to use the hashtag #YourTMGarden to share your images with us on Instagram.

Find more stunning perennial plants to grow from seed, along with plenty of great care advice over at our perennial hub page.