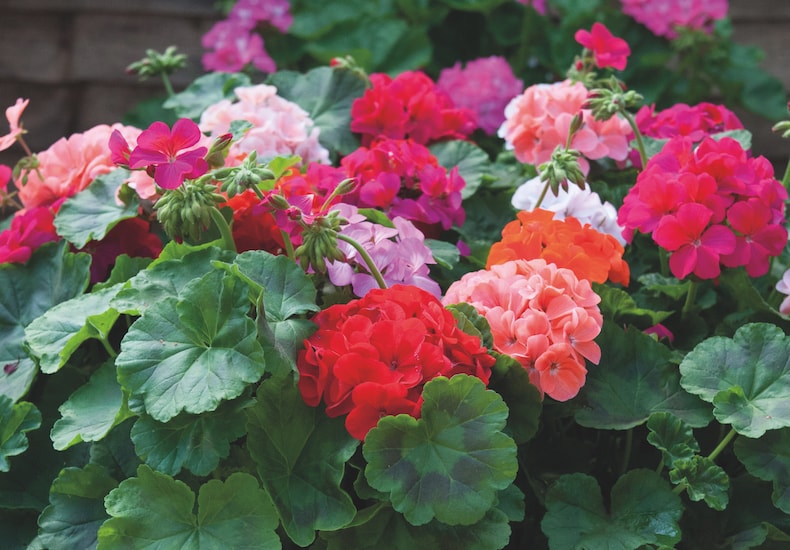 The history of geraniums

Until the mid 1960s geraniums (zonal pelargoniums) were all grown from cuttings but a number of problems were encountered which discouraged gardeners from continuing to grow them in this way. The vigour of the stocks was deteriorating, disease was becoming more common and more difficult to deal with and the cost of over-wintering in frost free conditions was increasing rapidly with rising fuel prices. So when the first seed-raised varieties appeared, with all the attendant publicity, they were presented to a gardening public eager for some solutions.

What were the problems with old geranium varieties? 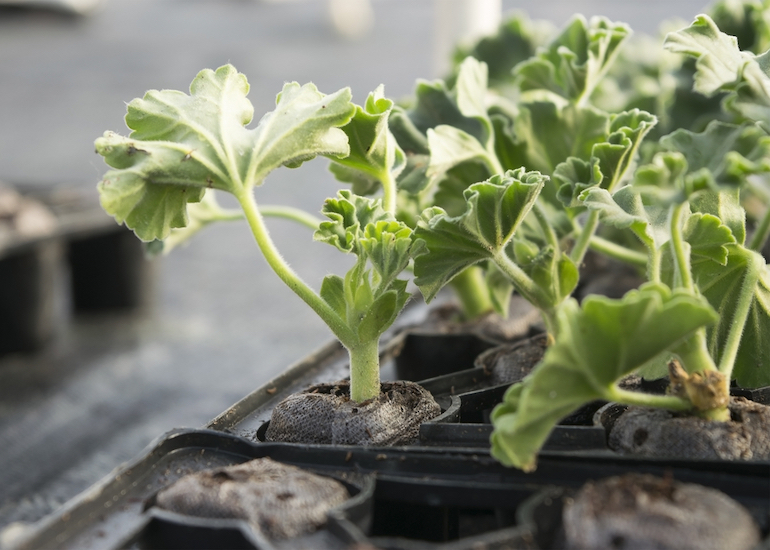 Old geranium varieties suffered from lack of vigour and viral diseases. It’s worth describing the problems that were proving such a headache in a little more detail as, in almost every case, seed-raised varieties seemed to provide the answer.

It was thought that the simple fact of constant propagation of an old variety by cuttings led to a loss of vigour. This factor was also considered important in relation to problems with other plants such as the apple 'Cox's Orange Pippin'. In effect, if you keep taking cuttings from your new plants year after year - and remember that all plants are derived from just one original plant - the cuttings that you root this year of a variety first raised 50 years ago are in effect 50 years old. This leads on to the concept of physiological ageing which I do not propose to go into but, in essence, there is still evidence for the idea that constant propagation over many years can, in itself, lead to a loss of vigour.

But loss of vigour is also often caused by diseases, particularly viral diseases. One virus seems to cause most of the problems and it goes by the misleading name of the pelargonium leaf curl virus. It is misleading because normally the leaves curl very little. More common visual symptoms are small yellow spots which become darker and spread until the leaf puckers and dies. With this goes a significant loss of vigour and of flowering capacity. This virus, and one or two others which afflict geraniums, are soil borne but the precise nature of their transmission is not fully understood.

Blackleg is a disease which has always been a problem but which became worse as the plants became less vigorous and so more susceptible to attack. Heating the greenhouse to keep plants frost-free through the winter became a great deal more expensive, especially as oil prices rose rapidly in the 1970s, and this too discouraged the growing of old-fashioned varieties.

When seed-raised varieties, which seemed to solve these problems, were introduced, many gardeners were predisposed to try them. The new plants from seed were vigorous, virus free, suffered less from blackleg and were treated like half hardy annuals so the heating costs were much less. But the first varieties were not up to the standard of the old ones when they flowered in the garden.

What were the first seed raised varieties of geranium? 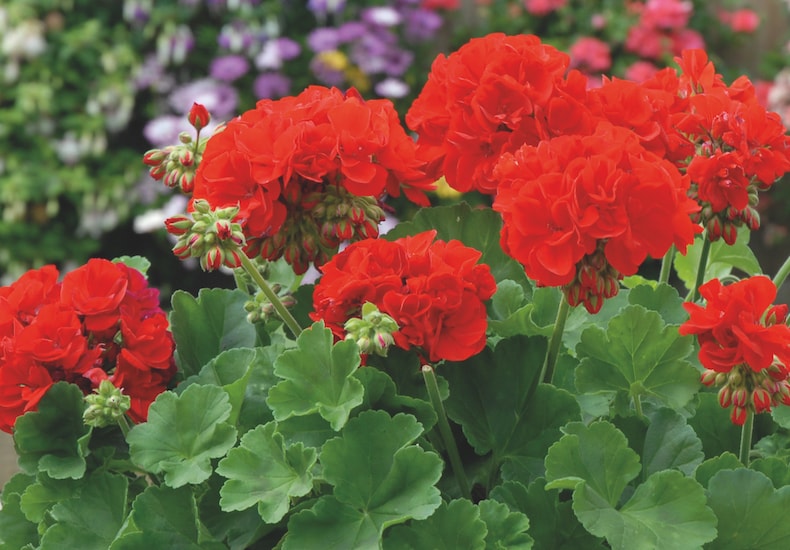 'Nittany Lion' was the first seed raised geranium variety to appear, in the mid 1960s, and was raised at Penn State University in the United States. It had the big drawback of taking a very long time to come into flower. A few years later 'New Era' and 'Carefree' were introduced, but although these matured a little more quickly, they made very tall plants with fewer heads of flowers than the old cutting-raised types. The colour range at this time was restricted to red and a salmony shade.

In 1972 'Sprinter' arrived on the scene and this is the variety that most people know best. It was more dwarf than earlier varieties, flowered more freely and made more compact growth, so both gardeners and commercial growers took to it much more enthusiastically than they had to the previous introductions.

Through the 1970s and 1980s more and more varieties have been introduced and every year new ones appear and old ones vanish from catalogues.

What are the most popular types of geranium?

There are a number of different popular groups of geranium. Here are six of the most common. 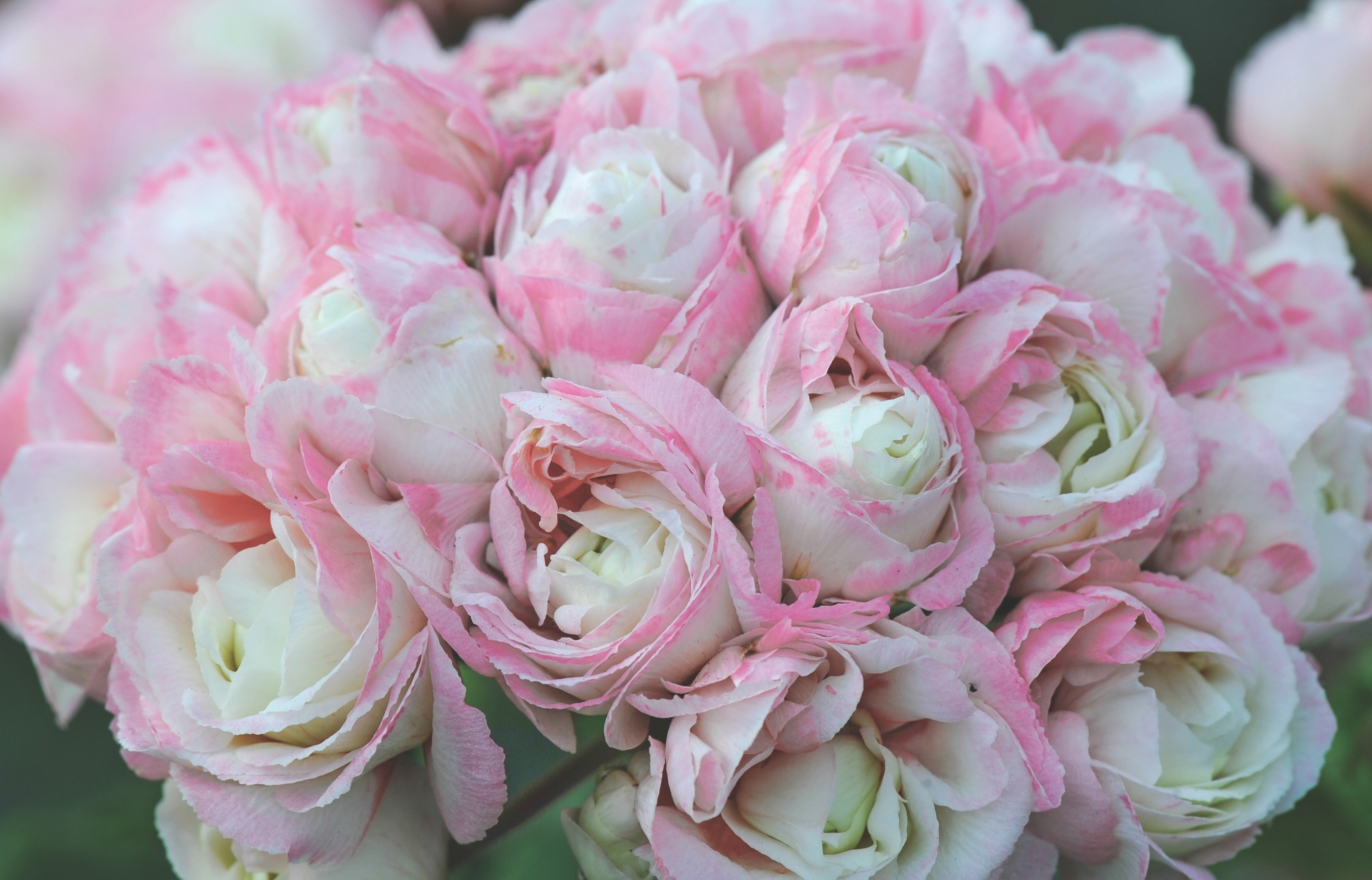 The majority of varieties fall into this group. They reach 12-15in (30-38cm) in height with full heads of large flowers. Many of these varieties are intended for use by commercial growers who use a dwarfing chemical not available to home gardeners in the UK so my first choice of varieties in this group is the 'Gala' series of nine colours which stay fairly compact without this treatment. Others particularly worth growing are:

Two series of varieties are worth looking out for which both maintain a very high standard over a good range of colours - the 'Century' series and the 'Orbit' series. Due to a genetic problem, no white varieties have zoned foliage.

A relatively new, slightly dwarfer group reaching about 10-12in (25-30cm). They are characterised by particularly pronounced branching from the base of the plant, very early flowering and the large number of flower heads. Unfortunately they sometimes cease flowering before the end of the season on poor soils but, in reasonable garden soil and if deadheaded and watered, they are probably the most dramatic in the garden. This group originated in East Germany but varieties are now coming from elsewhere.

The best are the 'Diamond' series of varieties in scarlet, cherry red and rose pink, the 'Pinto' series (also known as the 'Pulsars'), and the British bred mixtures 'Lucky Break' and 'Dame Fortune'. These last two are not F1 hybrids, which all the other varieties are, so are significantly cheaper though a little variable in plant size. The only difference is that the 'Dame Fortune' mixture contains a white. 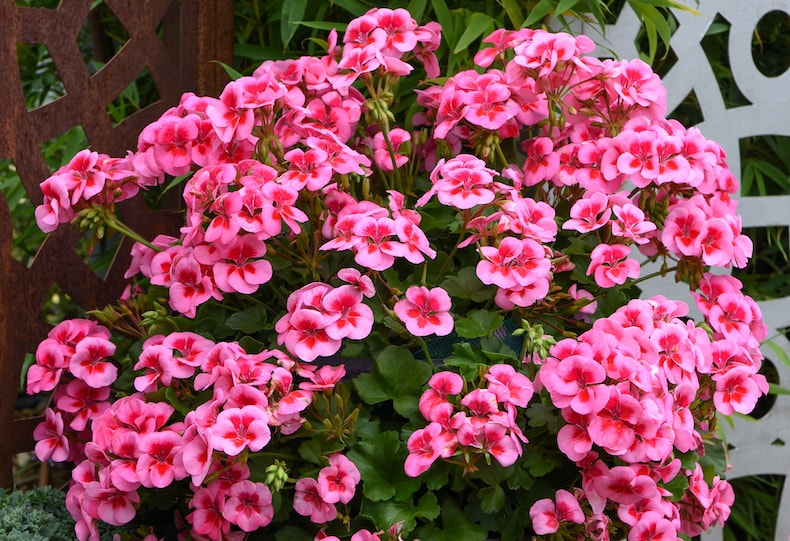 Reaching only 8-10in (20-25 cm) the varieties in this group are ideal for tubs and small raised beds, window boxes and other containers. The 'Video' series of four colours is the best in this group and is one of the best of all varieties introduced in recent years. The group also includes 'Playboy' and 'Gremlin', though these are less often seen. 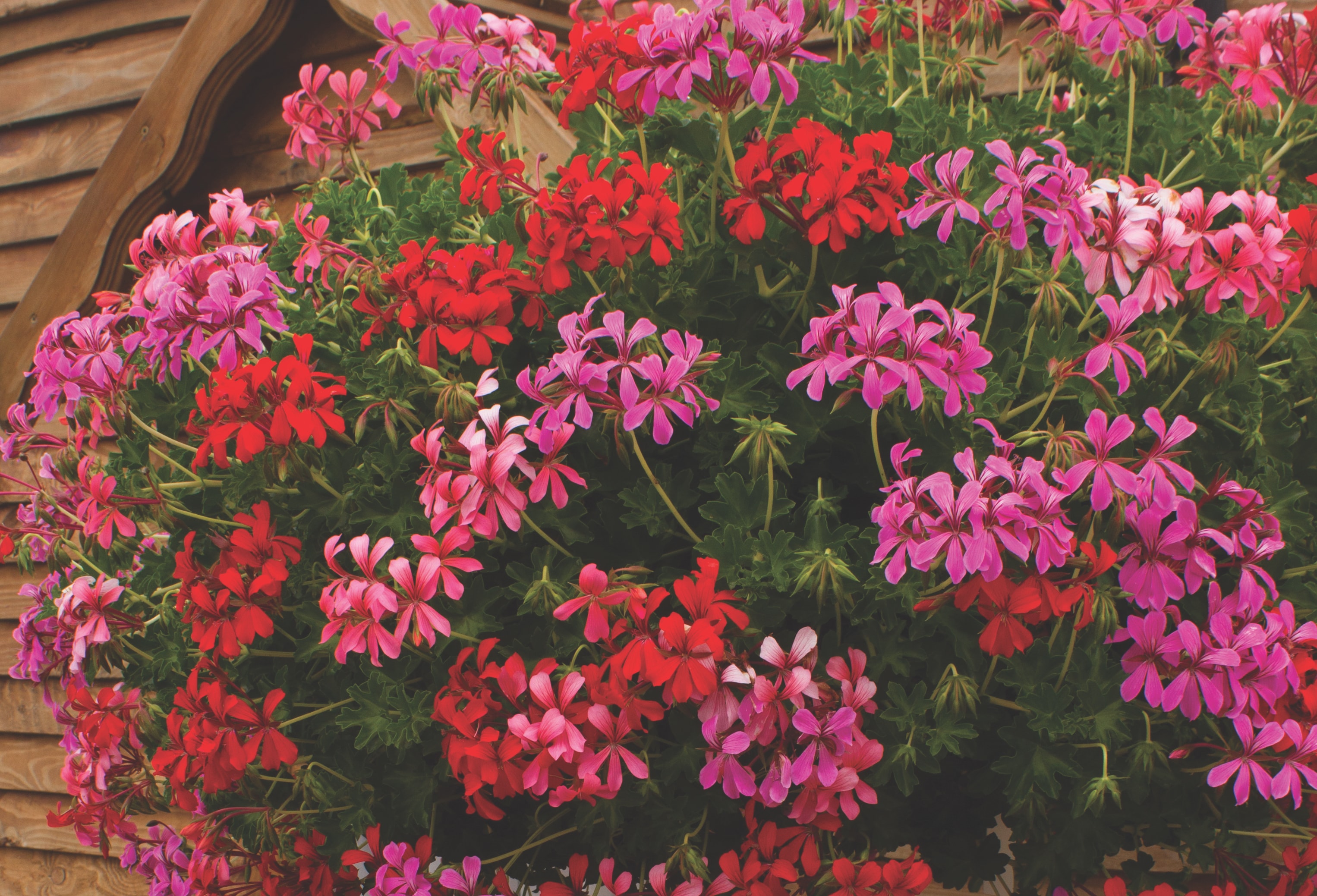 Varieties with flat arching growth are intended for hanging baskets and tubs, though I have found them to be very good spreading plants for the border. The British bred 'Breakaway' series is the best of a small number of varieties with 'Red Fountain' (also known as 'Orange Cascade') also often seen. 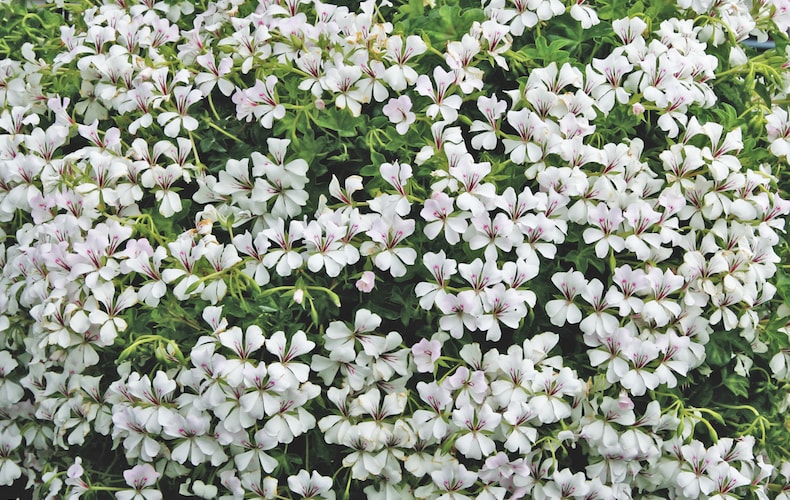 The first seed raised ivy-leaved type was recently introduced after many years of breeding work in the United States. 'Summer Showers', like the original zonal types, is not entirely satisfactory and is also expensive. Owing to the long internodes, the effect of the flowers is rather diffuse and this is not helped by relatively sparse flower heads. Interesting rather than dramatic, but a group which will probably show improvements in future years.

The British plant breeders seem to specialise in this group. The star-shaped flowers of 'Startel' and 'Voodoo', the speckled flowers of 'Speckles' and the dwarf 'Playboy Speckles' plus the dark-eyed 'Eyes Right' all originate in the UK, although the white-eyed types such as 'Hollywood Star' and 'Bright Eyes' do not.

How can I grow geraniums from seed?

Geraniums are easy to grow from seed with the right temperature and light conditions
Image: Geranium 'Border Supreme' F2 Hybrid from Thompson & Morgan

The seed of all these varieties is relatively expensive so it pays to give it the best possible treatment. The most crucial factor in the germination of geraniums is the temperature, which needs to be 75F (24C). At this temperature germination should take place in a matter of days. At cooler temperatures, germination will be slower, erratic, there will be a larger proportion of abnormal seedlings and fewer seeds will appear. A thermostatically controlled propagator should provide this temperature with little trouble but it is important to ensure that this temperature is maintained at seed level and not just at the level of the heating element or at the base of the seed pots. A carefully placed maximum/minimum thermometer is essential to ensure that the thermostat is set correctly.

I have used both soil based and soil-less based seed sowing compost and found that a soil-less based compost incorporating a drainage material such as sharp sand, vermiculite or perlite gives the best results.

Although modern varieties flower much more quickly than the old 'Carefree' types, they still need a longer growing season than most half hardy plants so it usually pays to sow in January to get flowers for the end of June. The precise timing of flowering will depend on the variety and the temperature during the growing period.

The seed can be treated in a number of ways. To see which of three suggested methods gave the best results I used the same variety and treated it in three ways. I sowed seed in a 3in (7.5cm) plastic pot and pricked it out into seed trays when the seedlings were big enough to handle, then potted up later. I also sowed seed individually in Jiffy 7 netted peat pellets and moved them into 3m (7.5cm) pots at the appropriate stage. For the third method I sowed seeds individually in small, ¾in (2cm) peat pots and these were potted up at the appropriate stage. Otherwise they all had the same treatment.

They were all ready to plant out at the same time and all flowered together - there was no difference at all. So for the home gardener, it seems, no one method is best.

One important factor in successful germination of geraniums is constant moisture in the early stages. If the seed starts to germinate and the delicate young root comes into contact with dry compost it will probably not survive.

Recent research at a government research station has revealed another successful approach. Now that heating equipment is more sophisticated and insulation and other heat saving techniques have improved so much, there is an argument for sowing seed in the autumn and growing it through the winter, in very cool conditions.

Can I sow geranium seed in the autumn?

Sow seed in October, when ambient temperatures are still fairly high so fuel costs are reasonable, and then grow the young plants through the winter and spring at 45F (7C). This system saves a little on fuel compared with January sowing but produces earlier flowering and better plants. Flowering time is more comparable with plants grown from a January sowing but kept at higher temperatures.

Whichever method is chosen, regular feeding is necessary as is attention to disease control, especially on overwintered plants. Fumigation with a fungicide is preferable to spraying. Spring sown plants are best watered using a capillary system to keep them constantly moist but autumn sown plants should be watered by hand to avoid over wet compost in the winter months when growth is slow.

Of course if you are over-wintering young seed raised plants, you can utilise the warmth to keep fuchsias, regal pelargoniums and other tender perennials like begonias through the winter and so make the best of your insulation and fuel.

For more information about growing and caring for geraniums, check out our geranium hub page which leads you to some of the best online resources available.