Brown rot is caused by a fungus and, unless measures are taken to limit its damaging effect, the disease can destroy entire crops of apples, pears, plums and cherries.

What is brown rot?

Brown rot is a fungal disease that infects fruit and ornamental trees. It’s spread by insects, wind and rain, as well as infected fruits touching each other. Wounded fruit are particularly susceptible.

In spring, the spores infect blossoms and can ultimately kill stems and branches. As the year progresses, the dead flowers can stay on the tree and any fruit that grows will show signs of active rot.

The disease develops over a wide temperature range throughout the year, but wet conditions allow the spores to germinate on the flowers and penetrate the plant. Spores can also be carried by insects and birds directly into the fruit, which, if left near the tree, will allow the fungus to overwinter and release spores in the spring, starting the cycle over again.

How to identify brown rot

Brown rot starts as a small brown spot or ring and spreads to encompass the whole fruit. Grey-white pustules appear as the rot advances. The fruit can remain brown and shrivelled on the tree, or may drop off.

If you’re vigilant, you may notice impending signs of brown rot at the flowering stage. The fungus causes blossom wilt, whereby the fruit tree’s blossoms and leaves shrivel and turn brown. Where infected fruit touches the bark, small cankers may appear.

How to prevent brown rot

Remove and destroy infected fruit – both on the tree and on the ground – to deal with brown rot. But don’t put them on the compost heap as this will allow the disease to linger in your garden. You can bury them in your garden, as long as you dig down at least 30cm. Minimising the carry-over of spores is one of the most effective ways to limit the damage of the disease and prevent its recurrence or spread from tree to tree.

Keep the base of any potentially infected trees free from debris, with a closely mown lawn. This allows you to see when fruit has fallen, and remove it as quickly as possible.

Pruning infected stems and branches is also effective as it interrupts the disease’s life cycle and can prevent the brown rot from spreading. Pruning improves air circulation too, and if you do it during the autumn/winter months, any lesions on the branches will be more visible.

Take measures to protect your apple trees from other diseases like apple scab, as any split fruit will be much more susceptible to brown rot. As the disease is spread through wounds, netting fruit to prevent damage from birds will also help to limit its spread.

Planting new fruit trees? Opt for varieties with a degree of resistance, like Czar plums, to give you a better chance of healthy crops. 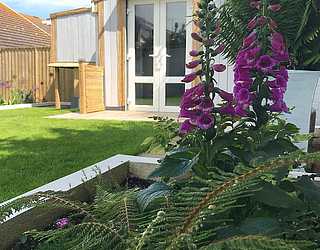