How to grow petunias

Petunias are amongst the most showy and reliable summer bedding plants. You can buy petunia plants by the trayful as excellent value-for-money plugs, or sow your own petunia seeds and raise your own.

Here, petunia expert Graham Rice explains how to grow healthy flowers that are positively laden with blooms. He also shares his favourite varieties for sunny and shady conditions.

Where did petunias come from? 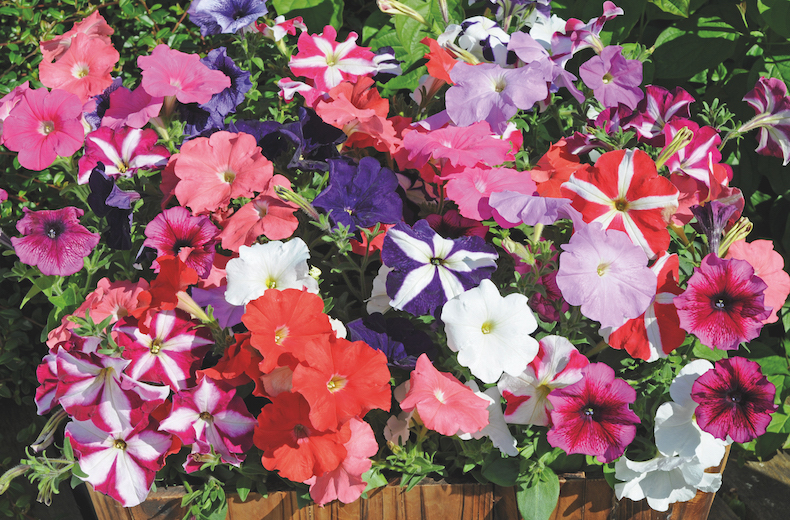 Although there are about forty species growing in the wild, the showy varieties that we grow now are all derived from just two perennial petunia species native to Argentina. Petunia axilliaris is a relatively tall, upright plant reaching about 2ft (60cm) with tubular, sweetly scented, white flowers and the sticky foliage which still characterises modern varieties. Petunia violacea, on the other hand, reaches only 12in (30cm) and has a much more prostrate habit. The flowers are broader and more open in shape and come in dark rose or violet. These have been united in Petunia x hybrida, amalgamating the main characteristics of each.

Like most popular bedding plants, a great deal of hybridisation has been undertaken over the years between petunias. Like the geranium, it has been transformed from a perennial plant raised from cuttings, into a seed-raised bedding plant which is well within the scope of most home gardeners.

Where should I grow petunias?

Petunias are primarily plants for sunshine and always flower best in full sun. It's true that they’ll put up a reasonable show in half shade, but give them plenty of sun and the difference is dramatic. Even though there’s been a great improvement in the weather resistance in modern varieties, the flowers can still be damaged in wet and windy weather. Weather resistance has been improved in two ways. Some varieties have petals which are inherently more resistant to rain, while others solve the problem by opening new flowers very quickly. Even so, when the weather is wet the plants still have a tendency to produce foliage at the expense of flowers.

In the UK, the first varieties were treated as perennials and grown in greenhouses outside. This was partly because the first varieties were less weather resistant than those grown today, and partly because gardeners didn’t realise quite how happy they were outside. Cuttings were taken in late summer and overwintered in a frost-free greenhouse to provide plants for the following year. This isn’t a technique which should be totally ignored today. In the southern United States where the climate is rather milder, they were always grown outside.

As well as a sunny site and a little shelter from the rain and wind, petunias prefer well-drained soil. It’s not always realised that petunias prefer an acid soil. This characteristic has been minimised in modern varieties through a simple selection process; plants which don’t thrive under a variety of soil conditions are excluded from breeding programmes, but it's still true to a certain extent.

How to sow petunia seeds

Petunia seeds should be sown in the warmth in spring. To produce bushy plants that can be planted out in late spring or early summer, sow in early spring. Choose a peat free seed sowing compost, and improve drainage by adding some horticultural sharp sand, perlite or vermiculite into the mix.

The temperature for germination should be between 65 and 75F (18-24C) at seed level. The easiest way to get the correct temperature is with a heated propagator or, if this isn’t possible, in a warm room in the house. Don’t choose a room which gets cool at night.

Sow the seeds thinly and don’t cover them. They need light to germinate and even a thin covering of compost can severely reduce their chances. Carefully monitor the moisture in the compost and keep it moist. This is best achieved by covering the seed pots with polythene or glass and a sheet of newspaper to reflect strong light, so the surface of the compost doesn’t heat up too much. If the compost dries out the young seedlings will quickly die.

How to pot on petunias

If sown thinly, the seedlings can be left in the seed pot until two true leaves can be seen. The seedlings suffer less of a check if moved at this stage as well. To ensure that seedlings have enough space in the early stages it may pay to use a seed tray rather than a pot.

After pricking out, the ambient temperature becomes important. Temperatures below 50F (10C) discourage growth of the main central shoot and encourage the development of side shoots from lower down on the plant. Unfortunately this also delays the appearance of the first flowers. At temperatures above 65F (15C) basal branching is restricted, the main stem grows more quickly and flowering is hastened. Although garden centres like to sell plants in flower, this doesn’t matter to the home gardener so by sowing in early spring and keeping the temperature cool after pricking out, well branched plants should be produced which will flower more effectively when planted out. The length of daylight also influences flowering time and basal branching, but the control of day length using artificial lighting and blackouts is probably beyond the scope of amateur gardeners.

When the rosettes of foliage cover the compost, the seed trays can be moved from the greenhouse to frames and grown cool. The main problem with petunias seedlings is the risk of damping off. As long as the plants are frost-free they’re happy. Although they’re not quite as hardy as their relatives the nicotianas, they are tougher than many people think. They can be planted out as soon as the last frost has passed. Mix a special petunia fertiliser into the compost at this stage to get the best results.

In the garden, petunias can be used in beds and borders, pots, window boxes and hanging baskets. Every year more varieties appear, and these are usually divided into two groups: grandifloras and multifloras. The grandifloras tend to have the larger flowers and need ideal conditions to make the best show. Weather resistance is not their strong point. Multifloras, on the other hand, have rather smaller flowers in larger quantities, are a little more compact in growth and tend to put up with bad weather rather better. The bud segments are smaller and pointed.

Which variety of petunia should I choose? 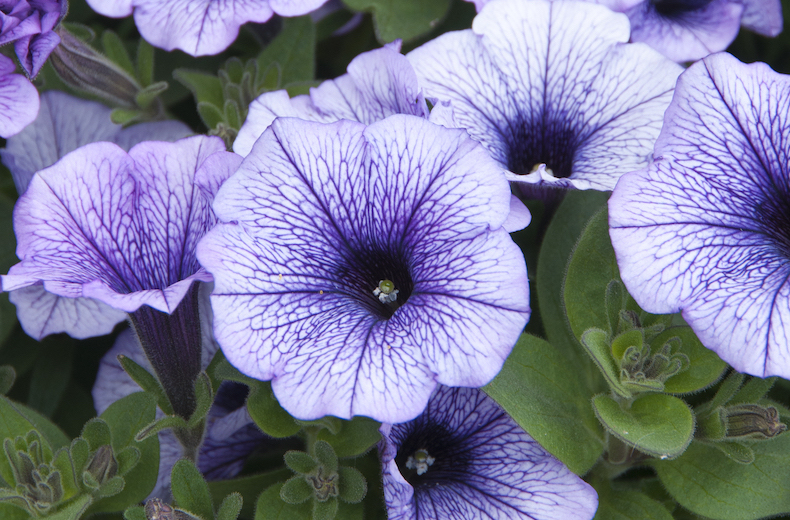 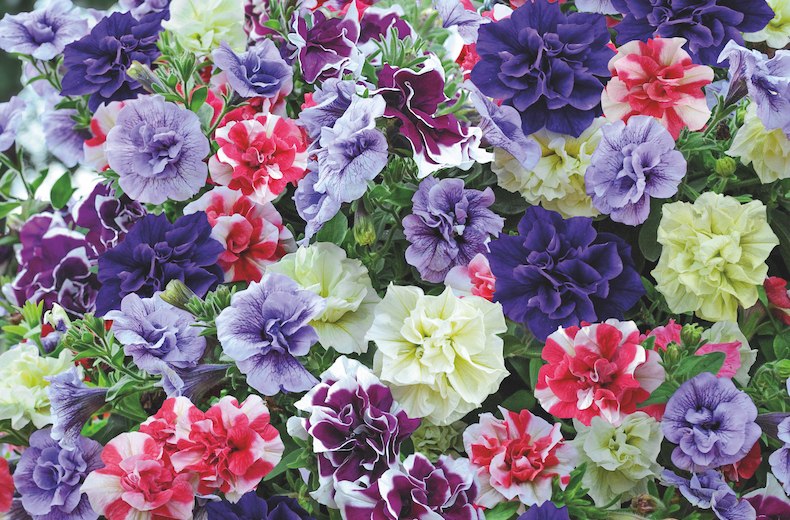 I mentioned at the beginning that petunias are naturally perennial plants and this means they can be raised from cuttings. So if you fancy a few winter pot plants, you can take cuttings of your favourite colours from the garden in early autumn. The cuttings should be 3-5in (7.5-12.5cm) long and they root easily straight into potting compost. Pot them into 3in (7.5cm) pots and then 5in (12.5cm) pots of potting compost with extra grit or perlite and keep a minimum temperature of about 50F (10C). By using this method you will get substantial plants for the winter far more quickly than by sowing seed in the winter.

Please note: Some varieties mentioned may no longer be available.

Graham Rice is Editor of Growing from Seed and author of A Handbook of Annuals and Bedding Plants (Croom/Helm/Timber Press).

We hope we’ve answered all your petunia questions, but if not, please visit our petunias hub page for more help and information on petunia growing and care. Share you petunia displays with us via our social media channels using the #YourTMGarden. We love to hear from you!