How to grow wisteria 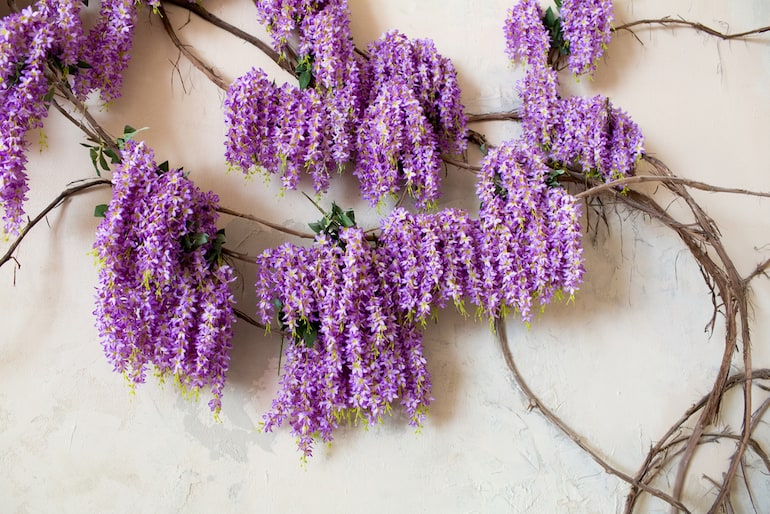 Wisteria makes a fabulous statement on a wall, fence or pergola
Image: Shutterstock

Wisteria is the quintessential climber for the English cottage garden and an absolute joy in May and June when the beautiful, scented pendants of flowers create a breathtaking display.

But often gardeners find these climbing plants a little daunting – the idea of all that pruning and training feeling far too complicated. It’s a shame because growing wisteria is much easier than you might think. In fact, with the correct care these long-lived climbers will reward you with many years of pleasure. Read our useful guide on how to grow & train Wisteria below.

There are lots of cultivars available but most are produced from two species – wisteria sinensis (Chinese wisteria) and wisteria floribunda (Japanese wisteria). Here are the main differences between them:

Where to plant wisteria

Location is in important factor to consider when growing wisterias. They’re long-lived and form woody stems which require significant support. This makes them very difficult to move if you change your mind in a few years time. They also require regular pruning to keep them under control and to encourage flowering, so it’s well worth taking your time to choose the best possible location for your plant.

Grow wisterias in a sunny or semi-shaded site in any moist, well drained soil. Wisteria flower buds can be damaged by hard spring frosts so choose a sheltered position if possible.

How to plant wisteria

The ideal way to grow wisterias against a wall is to train them as an espalier, with horizontal support wires (3mm galvanised steel) set 45cm (18") apart. Alternatively, you can train them onto a sturdy pergola, or even onto a tree. Supports are best put in place before planting as it will be much harder to install them once the wisteria is in the ground.

Plant your wisteria in autumn or spring. Prior to planting, add plenty of well-rotted manure or garden compost to the soil to improve its fertility and drainage. It’s vital to take the time to create ideal soil conditions for your wisteria from the very beginning, because you’ll be living with the plant for very long time.

When planting out your wisteria, use the depth that it was planted in the pot as your guide. If you’re planting a bare-root wisteria then look for a soil mark towards the base of the stem which indicates the depth to which it was planted in the ground at the nursery. This is usually found a little below the graft point – a bulge in the stem where the main plant is grafted to the rootstock.

How to look after wisteria

A well cared for wisteria will reward you with a fine display of scented blooms
Image: Alena.Kravchenko/Shutterstock

During their first year, wisterias benefit from regular watering to help the roots establish. Once established, wisteria should only need supplementary water during dry periods. You may wish to apply a high potash feed during the spring to encourage flower production, but don’t overdo it because overfeeding can result in more foliage and fewer flowers.

Why isn't my wisteria flowering

Wisteria flower buds can be damaged by hard spring frosts so choose a sheltered position if possible
Image: Shutterstock

The answer to this, one of the most frequently-asked gardening questions we receive, usually lies in one of the following explanations.

How to prune wisteria

Just the thought of wisteria pruning sends some gardeners into a panic, but it’s really not difficult once you understand a few basic principles.

Unlike many plants, wisteria needs to be pruned twice a year – once in late winter (February) to prepare the flowering spurs for the coming season, and again in mid-summer (July to August). Summer pruning controls those long, whippy shoots that are heading off into the distance, and encourages them to become flowering spurs instead.

During the first two years, the aim of pruning is to train wisteria to create a framework of permanent stems. This involves selecting and tying-in specific main shoots to the supporting wires and cutting back any unwanted growth. After two or three years, the plants will build up a strong branching habit which forms the ‘skeleton’ of your wisteria.

Now you have the basics of growing wisteria, we really hope you’ll feel confident to give it a go. But do remember, while correct training and pruning of wisteria definitely encourages better flowering, these plants are surprisingly forgiving.

And if you're looking for more wisteria growing advice, head over to our climbing plants hub page - Thompson & Morgan's dedicated resource covering everything you need to know about growing climbing plants.

How do you grow wisteria?

Grow wisteria in a sunny or semi-shaded site in any moist, well drained soil. Wisteria flower buds can be damaged by hard spring frosts so choose a sheltered position. In time wisteria forms thick, woody stems that require significant support.

Why isn't my wisteria flowering?

Wisteria needs to be pruned correctly in order to flower. While wisteria often thrives on neglect, it also appreciates extra water between July and September when the buds are formed for next year's flowers. Over feeding can produce more foliage and fewer flowers.

When do you prune wisteria?

Unlike many plants, wisteria needs to be pruned twice a year – once in late winter (February) to prepare the flowering spurs for the coming season, and again in mid-summer (July to August). During the first two years, the aim of pruning is to train wisteria to create a framework of permanent stems.