How to grow rhubarb

Growing your own veg from seed can help save money
Image: Rhubarb 'Timperley Early' from Thompson & Morgan

What could be better than rounding off your Sunday lunch with a piping hot bowl of rhubarb crumble? Or how about a delicious rhubarb pie, summer fool or homemade jam? Rhubarb is an undemanding perennial that’s easy to grow and fantastically hardy. In fact, it actually needs a cold snap in order to produce the best crops.

A healthy rhubarb plant will remain productive for at least 10 years so it makes an excellent investment. During the first year, you’ll need to resist the temptation to harvest the stems. But from the second year, you can harvest your rhubarb from April to June. Here are some tips on when to plant rhubarb and how to grow your own..

Which variety to choose

There are lots of different varieties of rhubarb to choose from. Here are some of our favourites – all of which are suitable for planting in autumn or spring.

Should you grow rhubarb from seed?

A rhubarb crown is a good option for beginners and green thumbs alike
Image: Shutterstock

Like most crops, you can grow rhubarb from seed, but it’s much easier to plant crowns or budded pieces. They establish well, making them ideal for beginners, but even experienced gardeners will appreciate the grow boost.

When to plant rhubarb 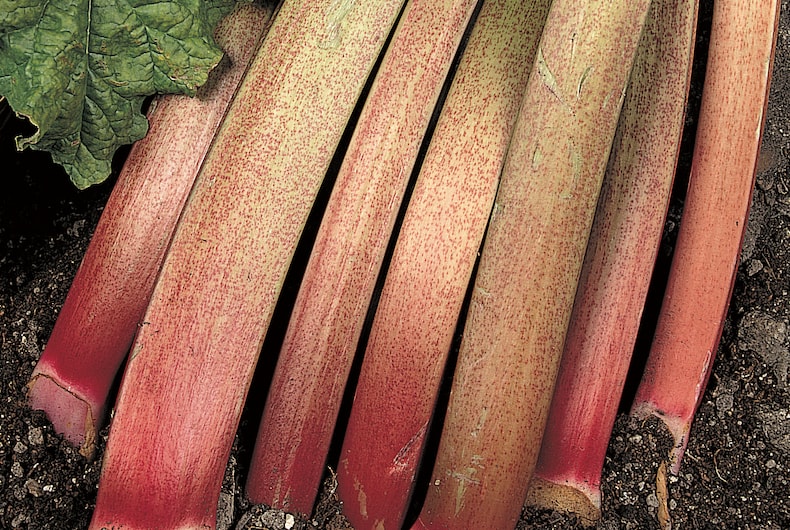 Rhubarb crowns and budded pieces are best planted in autumn or spring, while the soil is warm and moist.

If you’ve grown your rhubarb in a pot, this can be planted out at any time of the year as long as the soil is not frozen, waterlogged or suffering from drought.

Where should you grow rhubarb? 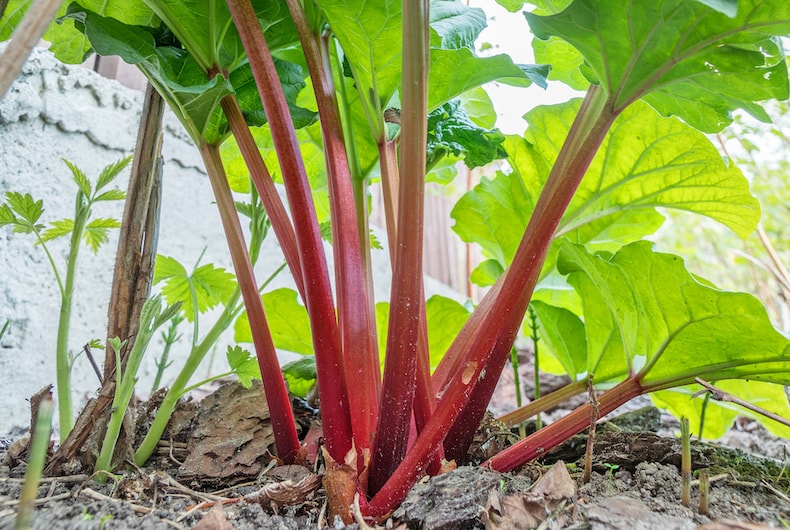 Find a place you're happy for rhubarb to grow for up to 10 years
Image: Rhubarb 'Polish Raspberry' from Thompson & Morgan

While undemanding, there are a few key things to keep in mind when selecting a place to plant rhubarb.

Firstly, rhubarb grows well in a sunny position with moist, well-drained soil, but it will tolerate semi-shade.

It doesn’t respond well to disturbance so the place you choose will need to be a permanent home – somewhere your plants can grow without interruption, from year to year. Take the time to properly prepare the right spot in your garden before you begin planting.

How do you plant rhubarb?

Take some time to properly prepare the area before you plant
Image: Shutterstock

Prepare the ground by thoroughly weeding the area and digging in two bucketfuls per square metre/yard of well-rotted manure.

Once you’ve done that, spread out the roots and plant so the tip of the crown is just visible above the soil.

Can you grow rhubarb in a container? 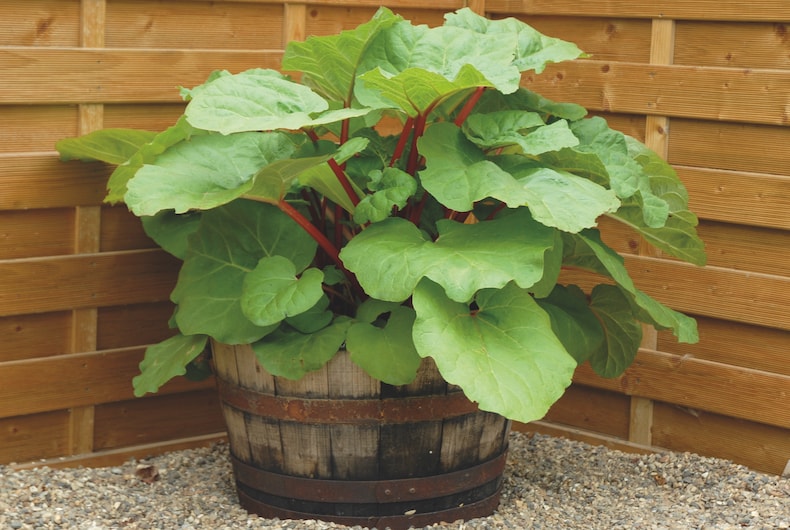 Rhubarb plants have big root systems so they do require a decent amount of space to grow. But if you use a container that holds a minimum of 40 litres of compost, you should be fine. In fact, you’ll most likely produce a decent crop.

A soil-based compost, such as John Innes No 3. mixed with plenty of well-rotted manure, is best for growing rhubarb in a container.

How do you force rhubarb?

Traditional forcing pots work, but so do dustbins and buckets
Image: Shutterstock

Forcing rhubarb will yield an earlier crop – a useful option if you can’t wait until April for your first harvest. While clay or terracotta pots are traditional (and are specifically designed for this purpose), an upturned dustbin or a large bucket will work equally well.

In January, cover the crown with a layer of straw and then place your choice of large container over the crown to exclude the light. Forced rhubarb stems can be harvested around eight weeks after covering, which may be up to a month earlier than unforced crops.

However, try to avoid forcing the same rhubarb crown for two years in a row; this can weaken the plant. Our top tip? Grow several rhubarb plants at a time and force just one a year in rotation.

Any seasonal advice for growing rhubarb? 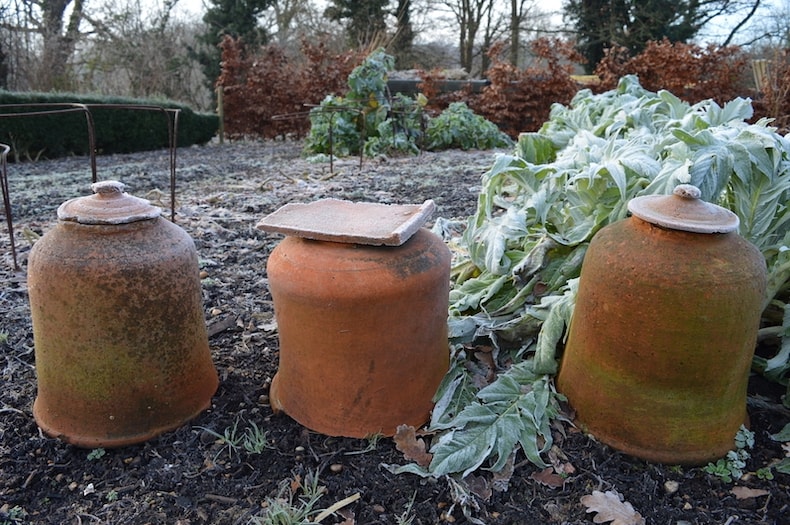 Rhubarb plants are very low maintenance, but they will produce better crops if given a little extra care and attention according to the season.

How do you harvest rhubarb? 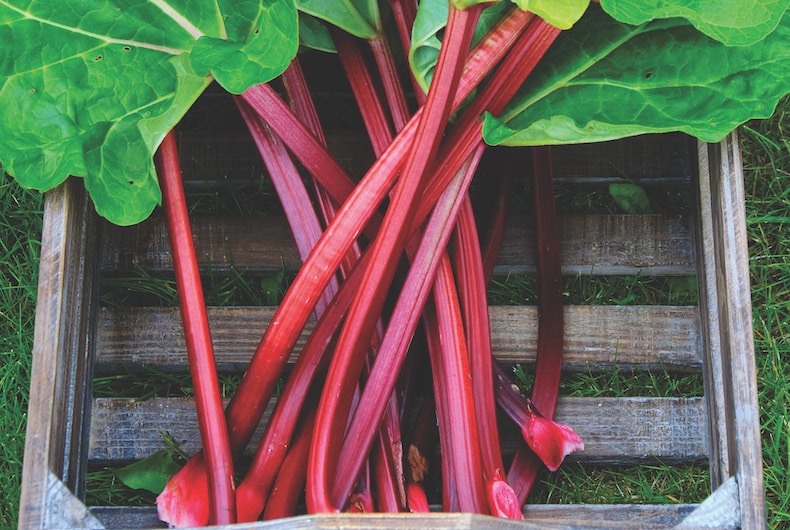 During the first year, you need to resist the temptation to harvest the stems, in order to allow your rhubarb plants to become properly established. But your patience will pay off because, from the second year onwards, your rhubarb can be harvested from April to June, when the leaves have fully unfurled and the stems are 30cm long.

To harvest, pull each rhubarb stalk from the base of the stem and twist it away from the crown. It's important to only harvest a few stems at a time (never more than half of the available stems), as over-cropping will reduce the plant’s vigour.

The rhubarb plant will need time to build up energy reserves for next year’s crop, so make sure to finish harvesting by the end of July. Don't worry if you find that you have more rhubarb than you can use; rhubarb freezes really well. Pickling and preserving is also a great way to extend the shelflife of your rhubarb.

A word of warning: only the stems of rhubarb are edible. The leaves contain oxalic acid, which is toxic if eaten. Simply trim the leaves away from the stems and add them to your compost heap.

Any problems to watch out for?

Slugs and other critters may find your rhubarb appealing
Image: Shutterstock

Crown rot can be a problem when growing rhubarb. It’s caused by fungi or bacteria (either in the soil or water) and, once it spreads, the disease call kill the plant. The best thing to do is act quickly and cut away any affected areas of the plant. Don’t be afraid to cut into healthy plant tissue – it could save the whole plant.

You may find that slugs, snails and other garden critters feed on your tasty rhubarb. The bane of gardeners all over the world, you’ll probably have your own way of dealing with slugs, from eggshell barriers to biocontrols. Keep an eye on your plants and deal with any pests quickly.

Which slug-deterrents have worked best for you? Get in touch over on our Facebook page and let us know! In the meantime, happy growing! Looking for tips on how to force rhubarb for early harvests, or recipe ideas on how to use up your glut? Visit our dedicated rhubarb hub page.