As such a novel crop we believe that the New Zealand Yam will become more important to gardeners in the near future - Oca are second only to potatoes in importance in the Andes, and did not suffer blight, or any noticeable pests and diseases in our own trials over the past 2 years. T&Ms Oca was supplied from a large Suffolk garden and so it has acclimatised to British soil and weather conditions over several years. Tubers can come in a host of colours, but our T&M Oca is a predominantly rose or red skinned with a cream or pale orange flesh and some reddish pigment in some of the tubers.

Oca tends to have a slightly tangy lemon taste. The flesh is firm but juicy and crisp when eaten raw or lightly cooked, and becoming more starchy if fully cooked. The tubers dont require peeling when eating Oca raw - just wash them clean, and they can be sliced to add a hint of a lemony zest to salads. peeling ocaAlternatively cook them in the same way as potatoes - boiled, baked, grilled or fried. They also make an excellent addition to winter soups and stews. Our T&M; Oca loses its skin colour on boiling and turns a more cream colour and loses any lemon flavour, becoming more nutty in taste. The tubers contain over 70% water but are nutritionally rich with carbohydrate, calcium and iron. You can even pick some of the fresh leaves in summer for their tangy, lemon taste which adds that bit of zest to a green salad.

Oca tubers contain oxalates (as a member of the oxalis family) as is evident when the plants are growing, with their distinctive oxalis leaf shape. Although gardeners need not worry as these Ocas are not invasive. Oxalates, concentrated in the skin of the tuber, are reduced if the harvested tubers are exposed to sunlight (tubers do not go green like potatoes). This process also sweetens the taste.

The small tubers are best planted individually in a 15cm (6") pots of multipurpose compost during April. As they are frost tender they should be grown on in the greenhouse or on the windowsill. Plant out the small plants when frost risk has past in late May and cover the plants with fleece until established. Each tuber makes quite a bushy plant so allow at least 90cm (36") between plants for optimum tuber production. Some of the stems which rest on the soil will readily root and the plant can grow to a sizeable bush. Oca also make a decorative container plant throughout the summer and up to the first frosts when the foliage will die back.

Alternatively, tubers can be planted directly outdoors in late May. By this time they may well be showing small sprouts. Plant Oca directly into a shallow drill, about 8cm (3") deep, and cover with soil or compost and a layer of fleece. Remove the fleece from early June or as the soil and weather warms. Plants can be earthed up as you would potatoes to give some further growing room and anchorage, although this is not essential. Oca prefers well drained soil and an application of a general fertiliser will be appreciated as the plants grow. A mulch of well rotted compost or grass cuttings around the plant during summer will keep the soil moist and aid the plants growth. Water plants well during dry spells, and especially from mid September when tuber initiation commences, as this will promote larger tubers.

Watch the video below to find out more about how to grow Oca (New Zealand Yam):

Click here to watch part 2 of Thompson and Morgan's 'How to grow Oca' videos.

Click here to watch part 3 of Thompson and Morgan's 'How to grow Oca' videos.

The essential point to remember is that the tubers form and swell as autumn develops, when day length shortens and temperatures fall. Ocas do not form underground tubers until very late in the season. Do not worry at all if the foliage gets frosted - it will die off after a heavy frost. Some plants may form some small aerial tubers on the stem. These need to be picked off before a heavy frost. Do not harvest the underground tubers until the last remnants of foliage has become frosted and died off from late November and into December. The longer you can leave the tubers in the soil the better. Lift the tubers carefully, dry them and taking care not to bruise or damage them, then store in slatted trays or a hessian sack in a cool shed or garage. Tubers do not need covering against the light, and will store happily for several months until sprouting commences and some of these can be replanted.

In our trials a wider spacing gave a higher percentage of larger cylindrical, slightly tapering tubers averaging 10cms (4") in length and 35g (1.25 oz) weight. We harvested an average of 50 tubers per plant of varying sizes. In a really good growing season, and allowing plenty of autumn and winter days to fully develop the tubers, then 0.75 kg (1.6 lbs) per plant may be possible. 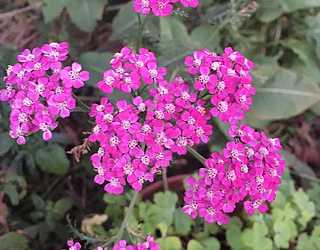