How to grow pumpkins 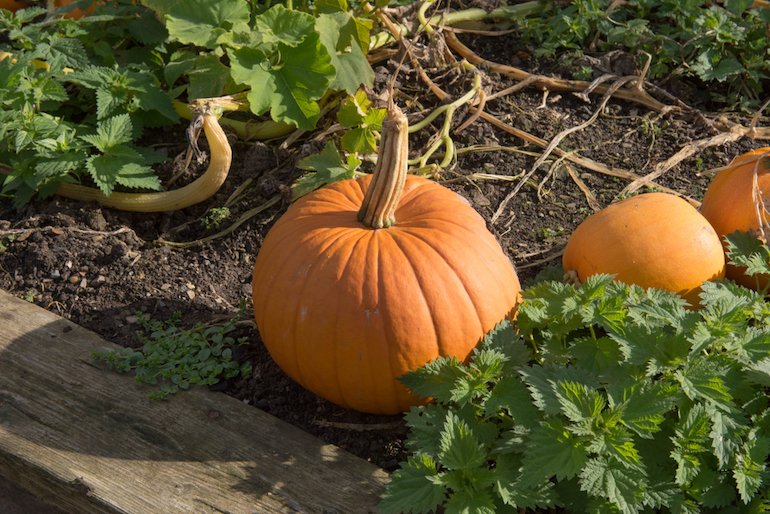 Pumpkins are easy to grow from seed in your garden or allotment
Image: Peter Turner Photography/Shutterstock

Pumpkins are magnificent autumn vegetables that are fun to grow and delicious to eat. All you need is a packet of pumpkin seeds, a sunny position and lots of water. Children love growing their own Halloween decorations and the flesh is delicious roasted, mashed or used as part of a warm winter soup. An excellent source of vitamins A and C, the seeds can be eaten as a healthy snack too!

Which pumpkin variety is best?

This heavy-cropping variety is popular for its fairytale shape and excellent flavour
Image: Organic pumpkin 'Cinderella' from Thompson & Morgan

Pumpkins come in all sizes and shapes, from tiny fruits to the enormous Pumpkin ‘Big Max’ that grows to a prize-winning 45kg! But before you begin growing giant pumpkins it’s wise to think about how much space you have to spare.

If you prefer traditional sized vegetables then ‘Jack Of All Trades’ is the perfect choice. With sweet orange flesh it’s ideal for carving and making sweet dishes like pies and cakes. And for something slightly different, why not try the small, attractive fruits of Pumpkin ‘Wee Be Little'. Simply cut off the top, scoop out the seeds, season with salt and pepper and replace the top before cooking in the microwave until soft. Delicious!

When to sow pumpkins

Pumpkins require warm daytime temperatures of between 18 - 30C (68F) and prefer a minimum night temperature of 16C (61F), at least until they’re planted out. In cooler areas pumpkins can be sown indoors from April to mid May for transplanting outside later, when temperatures have risen.

However if you’re short of indoor space, you may prefer to wait until the soil has warmed up in late May or early June and sow your seeds directly outdoors. Wherever you choose to start them, it's best to sow two seeds per hole and thin the weakest plant out later on. And if you choose to direct sow outdoors, start your pumpkins off under cloches to give them the best start.

How to sow pumpkin seeds

Watch our short video above to see how resident horticulturist, Sue Sanderson, sows her ‘Jack of all Trades’ pumpkin seeds. Here’s a quick recap:

How to plant out your pumpkins

To see how to plant out your pumpkins, watch the short video above. Here’s a quick recap:

How feed and pollinate pumpkins

Pumpkins are very vigorous growers, so they need a lot of fertiliser throughout the season to keep them healthy. The video above shares lots of top tips to help with feeding and pollinating. Here’s a quick recap:

How and when to harvest pumpkins

Leave your pumpkins on the plant for as long as possible until the skin has hardened and the fruits start to crack near to the stem. But be sure to harvest them before the first frost. Cut each fruit from the stem, leaving several inches of the stem attached. Watch the video above for more harvesting advice.

These flavoursome miniature pumpkins are perfect for carving and cooking
Image: Pumpkin 'Wee be Little' from Thompson & Morgan

How to use pumpkins

Delicious to eat, pumpkins have plenty of decorative uses too
Image: Thompson & Morgan

We hope this has answered all your pumpkin questions. Now all you need to do is decide which new variety of pumpkin seeds to try! Post your images on social and remember to tag us in using #YourTMGarden. Find more pumpkin advice and plenty about sowing and growing squashes too at our pumpkin and squash hub page.