How to grow poppies in your garden

Growing your own poppies from seed is an easy way to add striking swathes of colour to your garden, and a great filler for any unused space. Even better news? Once planted, they’ll come back year after year, forming graceful drifts over time.

Follow our simple guide on how to plant poppy seeds and you’ll soon have lots of these distinctive and delicate flowers to brighten up your beds and borders.

Which poppy variety should you plant?

You can choose from approximately 120 different varieties of poppy including annual, biennial and perennial flowers. They come in a wide choice of colours - sow a mixture of poppy seeds for a naturalised wildflower garden look, or make a dramatic statement by sowing a single colour en masse.

The Flanders or field poppy (papaver rhoeas) is the simplest to grow, and is best known as a symbol of remembrance for soldiers who gave their lives in the first World War. It’s an annual, bee-friendly variety that’s ideal in a wildflower garden.

If you want a longer-term plant, biennial and perennial poppies make a vivid addition to your garden or border. Oriental poppies have larger, blousy flowers, while Icelandic and Japanese poppies come in unique shades like mauve and gold.

If you’re growing poppies for culinary use, the opium poppy is a good choice. The seeds can be eaten and are used for adding extra flavour, crunch and bite to breads and cakes. Be careful, as the seeds of many other poppy species are not edible. Also, you must not consume any other part of a poppy plant – they’re poisonous.

When to plant poppies

Sow poppy seeds directly into your garden in spring or autumn. If you’re planting early in the year, usually between March and May is best, but you’ll have to wait until the following summer for a healthy display. Sow between the end of August and October for more flowers in the first season.

Check the individual seed packet for when specific varieties should be sown.

How to sow poppy seeds 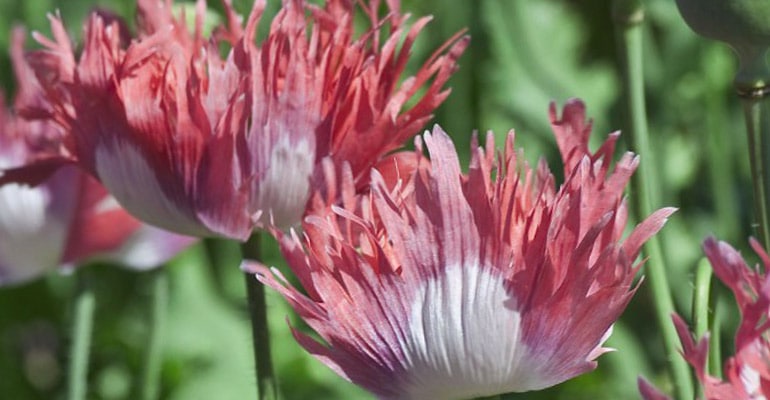 Left it too late to start from seed? You can buy oriental varieties like the satin poppy as mature plants. Harden off outside for 2-3 days when all risk of frost has passed before planting out in fertile, well drained soil.

Poppies are a great way to fill unused space and are easy to care for.
Image: Shutterstock

Poppies make up an important part of wildflower mixes, and are a particularly attractive pollinator plant to bring bees and butterflies to your garden - a great way to attract wildlife and get the kids interested in nature.