Each year, awards are given to companies for either their New Plant introductions or for their performance within their particular sector of activity. Over the years Thompson & Morgan is proud to have achieved many different awards including:

The 2010 Grower of the Year Award, for Buddleja 'Buzz'™ the first dwarf and compact growing Buddleja perfect for growing in tubs and containers:

The Grower of the Year Awards were held on 11th February 2010 and years of painstaking breeding work by a team of specialists were rewarded with the announcement that T&M had won one of the most important awards of the night. The result of more than seven years of specialist breeding work and a WORLD EXCLUSIVE, T&M's Buddleja 'Buzz'™ was named the Best New Plant Variety, showing major recognition for this ground-breaking new introduction.

Already a runaway success with T&M customers, Buddleja 'Buzz'™ is the first Buddleja that has been specifically bred to be a dwarf variety. Buddleja 'Buzz'™ is quite unlike traditional buddleja plants, that have a reputation for growing too tall and becoming unruly. Despite its compact nature, Buddleja 'Buzz'™ still boasts all the qualities its larger cousins are famous for, such as the huge sprays of pretty flowers that are known for attracting butterflies and wildlife into the garden. The compact plants will be smothered in flowers all summer long and will grow to just three feet (one metre) high.

The work of T&M's own plant breeder, Charles Valin, Buddleja 'Buzz'™ is a real achievement in horticultural development, and literally thousands of plants were grown and discarded before the final variety was selected. Mr Valin, said: "Buddlejas can grow so fast and have a bit of a reputation for taking over the garden, so we really wanted to create something that lets people grow these great plants, but on a smaller scale. To have won the award is a great feeling, and a real reward for so many years of breeding work. I remember at one stage looking out over a field of buddleja that were growing into complete giants and feeling so frustrated with it! At one stage when we were reviewing our breeding programme we felt like giving up, but we'd come so far it would have been such a waste and I really wanted to keep going. I feel so glad about that now and winning the award feels like a wonderful achievement."

The win for Buddleja 'Buzz'™ is the second time T&M has scooped the prize for the Best New Plant Variety, with the introduction of Pansy 'Friolina' taking the award in 2008. Hugely popular with our customers, 'Friolina' is the world's first trailing multiflora pansy. 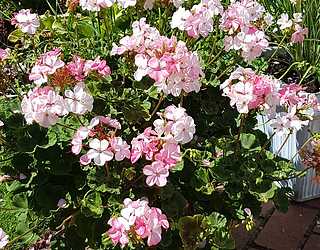